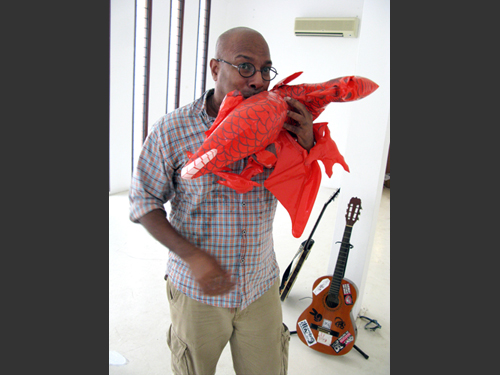 Part for intermittent contributions to art is being lucky enough to be invited to a group show. “Personal Effects” was fun but got captured by a art review by a Bangkok-based art critic. One of the images was also captured by the Asia Art Archive’s “Photologue: A Research A Trip, Kuala Lumpur, Malaysia.”

‘The only people that get to exhibit the paraphernalia of their personal lives are royalty,’ according to the organizers of ‘Personal Effects’. In response, they invited a group of 30 local artists, writers and designers to provide a treasured possession and communicate its personal significance through wall texts. The objects displayed were tagged with sepia-coloured labels that suggested anthropological cataloguing, but essentially, the exhibition appeared as a conventional art show replete with plinths and artful installations. In this respect, tensions between art and artefact were apparent from the outset, but the objects in ‘Personal Effects’ ran a gamut of considerations, from how objects become invested with personal meaning to how ordinary items come to function as readymades or as raw material for artists.

RogueArt is not primarily an exhibition space; rather it is an art consultancy service that occupies the upper floors of a beautifully renovated terraced building in downtown Kuala Lumpur. All the participants in ‘Personal Effects’ were locally established on the art scene in varying degrees, from practitioners to commentators. Among the contributions, playwright Huzir Sulaiman’s display of his father’s handmade shoes, alongside an extensive text written by him, emerged as a clichéd, nostalgic symbol of father/son relationships. On the other hand, the appearance of Sharaad Kuttan’s Nga Pyien (‘Lazy Little Boy’) – a plastic, inflatable Welsh dragon given to him by a friend – resisted the conventional visual rhetoric of ‘the personal’. Kuttan’s text revealed that the toy was provisionally titled by his Myanmese lover and that he initially believed the designation was referring to him.

At the other end of the spectrum, many of the objects displayed directly referred to, or constituted, contemporary art as we know it. Chang Yoong Chia aped the collaborative British artists Tim Noble and Sue Webster with a construction of plastic toys that cast a shadow of his profile, while Yap Sau Bin posted a notice that offered visitors guided tours in his inherited 1979 yellow Toyota Corona and consequently offered a retread of participatory or relational art.

While the ‘personal’ played a part, the objects on display were hardly reducible to their roles in their owners’ lives. Instead, ‘Personal Effects’ explored the ambiguous distinction between those objects that artists regard as valuable, personal possessions, and those they would present as art. Of course, all the objects ultimately emerged as art (how couldn’t they?) but here the question of such a distinction was posed in terms of which things in the world can be assigned significance and considered provocative, and which remain merely objects.

The Spectre Haunting the New Order

The Spectre Haunting the New Order

Encounter with a photograph

Encounter with a photograph

A Conversation with Melisa Idris and Sharaad Kuttan

A Conversation with Melisa Idris and Sharaad Kuttan