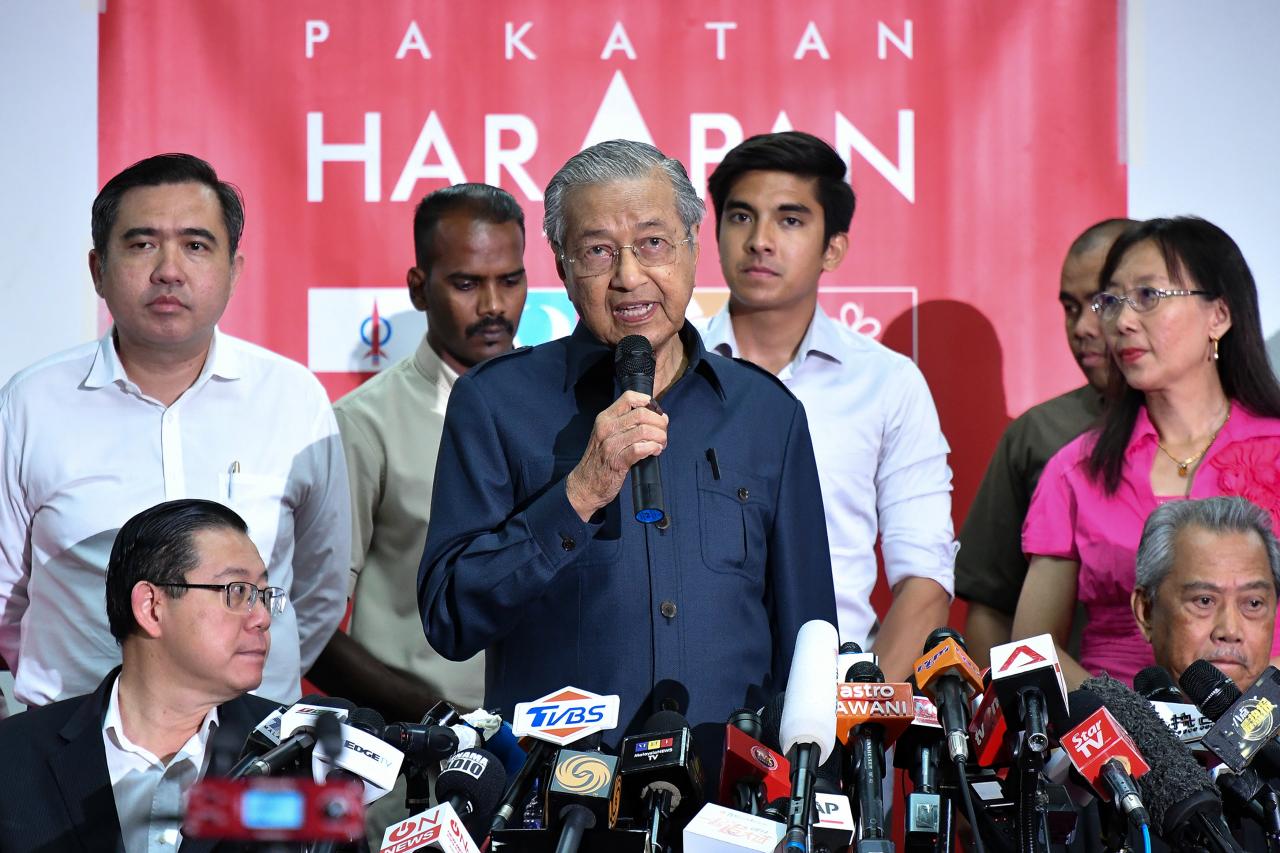 What Just Happened in Malaysia, and What Will Happen Next?

If there is one news headline that has dominated the aftermath of Malaysia’s surprise general elections, it is that a coalition of secularist, Islamist and ethno-nationalist led by a former strongman with the backing of civil society, defeated a corrupt administration and destroyed a coalition of parties that has held power for over six decades.

While largely accurate, the sub-plots in this Malaysian story – bucking global trends on the wind back of democratic politics – are equally important and will have a long-term effect on the dynamics of the Federation.

Before we get to Mahathir Mohamad, the 92-year-old (and his age is important) former prime minister who came to lead the charge against the ramparts of the incumbent Najib Razak’s United Malays National Organisation-led government, his erstwhile enemy Anwar Ibrahim with whom he forged an unlikely alliance and the nominally democratic electoral system that made the surprise results possible, we must look at the less celebrated political shifts that ended one of the most resilient regimes in the developing world, the Barisan Nasional (BN).

The east is red

While the media paid a lot of attention to popular anger towards the rising cost of living and allegations of the massive corruption of the Najib Razak and his wife, this was a narrative confined to West Malaysia, the peninsular that has dominated the politics of the Federation.

Resource-rich Sabah and Sarawak on the island of Borneo are two of the three territories that form modern Malaysia – Singapore left in 1965. Over the last decade have become increasingly restless with the label electoral “safe deposits” for the BN, and have agitated for greater state’s rights but within the terms of the coalition’s behind-closed-doors bargaining culture.

Sabah and Sarawak have very different dynamics but both represent the rise of regional identity politics that found their political moment in the last general elections.

Sabah-based parties of a variety of political persuasions, lead by a former cabinet member and high ranking UMNO leader who had been sacked by Najib, took the state assembly and delivered a good number of parliamentary seats that bolstered the victory at the Federal level. With the win, Najib’s coalition almost immediately bled from the defection of parties who see no reason to remain with BN. Sabah’s former chief minister, who tried allegedly illegal means to hold on to power, is now on the run from the law, apparently in exile.

BN went into the general elections of May 9 with 14 political parties, but currently has only four parties.

The more dramatic defections from BN comes form the territory of Sarawak, where the contest was only for parliamentary seats. Sarawak-based parties control the state and hoped to contain what observers calls the toxic fall-out from the Najib administration. BN in Sarawak had hoped that a combination of money politics and tight control on communications would keep the largely rural voting population within them, despite analysts noticing a swing in rural votes over several cycles.

The dramatic gains of the Sarawak-based Pakatan Harapan parties at the parliamentary level, and fears of the reversals at the upcoming state elections, has led the Sarawak BN parties to leave, declaring that they would cooperate with the new central government.

The new configuration in both Sabah and Sarawak will not be easy for the new central government and we can expect more bargains to be struck, for a part of the populace that feels they have been marginalised for 60 years. However, elite politics still dominate the dynamics at the state level, and critics note that without institutional reform, the increased autonomy for the state governments will not benefit ordinary people and corruption and patronage politics will remain, perhaps even flourish.

The east is green

Another winner in an electoral result with apparently many winners is the Islamic party, PAS (Malaysian Islamic Party). Despite expectations that they would be wiped out, it managed to retain control of one state, gain control of another and almost played kingmaker in two others. The geographical spread of these gains are primarily in the northeastern states of the peninsular.

This is significant because the party sough to play role of kingmaker in what looked like it might be a three-way fight for the votes of Malay Muslims who not only make up the demographic majority in the peninsular but because the electoral system is designed to accentuate their political heft.

PAS had been in the previous two electoral cycles allies of the Pakatan coalition, but were lured away by Najib with a promise to enhance the Islamic agenda specifically through the enactment of Shari’ah punishments. This shift in alignment split PAS, with a breakaway party forming and staying with Pakatan. Today the leader of the breakaway party, Amanah, is the defence minister.

Malay Muslims were the core of Najib’s UMNO control of Malaysian politics, though Malay Muslims have been represented at points in the political spectrum from left to religious right.

Today, PAS believes that their gains in the first-past-the-post system are solid and are backed by popular vote numbers that show them holding just under 20% of the Malay Muslim vote nationally.

What they are not saying is that both the party and the Islamic agenda hold no sway in the territories of Sabah and Sawarak, where it got less than 1% of the vote. This will stymie any national ambition with the current electoral set-up and political calculus.

Still, one PAS leader crowed that after the clean-up of government by the current government, they will take power at the next general election.

Is that likely? It is also worth noting that PAS went into the elections with an implicit pact with UMNO that helped them make those gains, but will those conditions hold at the next elections?

And with the Pakatan central government choosing to restore petroleum royalties to the states controlled by the Islamic party, Pakatan could win support in states where it came in a distant third.

Got ‘em by the crown jewels

Malaysia and Malaysians received much praise for the orderly and peaceful transfer of power, with the new prime minister sworn-in within 24 hours of the victory. This much dreaded moment, the tactic threat of violence if BN should lose, was even addressed by the outgoing Prime Minister Najib, who said in his belated acknowledgement that rumours that he had convened a National Security Council meeting to declare a state of emergency were attempts to slander him.

If talk that the ‘deep state’ – embodied no less by Mahathir himself – had abandoned Najib was true, there was still discernible resistance to this victory from some royal houses, in particular the rotating position of constitutional monarch who, while denying it, has proven to be uncooperative. What is interesting to note is that one active and popular royal house in the southern state of Johor that had been beating the drum of state identity threw its support to Najib and his administration. The backlash from his ‘loyal subjects’ caught the monarch off-guard and later with the loss of his state to the Pakatan coalition, has had a bracing effect on the monarchy for now.

The monarchy, along with the religion of Islam and the discourse of ethnic community bound by shared interest, has been the mainstay of UMNO’s politics though under the 22-year leadership of Mahathir. UMNO curtailed royal constitutional powers significantly.

What Mahathir was not able to do was to keep royals out of business and politics, practices which some observers say could be the ultimate undoing of system of sultans. Under Najib, several royal houses flexed their political muscle but today they are on the back foot, with leaked stories of alleged corruption and profligate spending making the rounds in the media.

And after tense stand-off when the monarch seemed to be refusing to accept the government’s choice of attorney general – a well known constitutional lawyer of Syrian Christian Kerelalite ancestry – Mahathir’s government won both the institutional battle as well as a symbolic one against a Malay Muslim majoritarian logic in governance.

It must be noted that neither Sabah nor Sarawak have sultans, and nor two of the 11 states of the peninsular.

On the road to a real democracy?

A side-show to the May 9 victory has been some rancour over who gets to claim to be one who “saved Malaysia”.

On one hand, is Anwar Ibrahim: his sacking by Mahathir 20 years ago precipitated the crisis of legitimacy for the ruling coalition, and who by some unexpected political choices, created a political coalition that was able to take and hold power for the last two years and whose court-room handshake with Mahathir forged the strongest challenge to BN.

On the other is Mahathir, a johnny-come-lately to the democratic moment, whose inclusion and subsequent leadership of Pakatan was opposed by many civil society leaders, but whose ability to demoralise UMNO’s rank and file took Pakatan over the top in an electoral system fixed to favour the ruling party.

Despite attempts to pit the two men against each other abound, the Pakatan’s pre-polls promise was to first make Mahathir leader, who would then give way to his then jailed successor Ibrahim.

But this question – who saved Malaysia  – is needless to say a false one, considering the complex history for the last two decades from the crack in the BN armour and, if one wants to be true to the complexity of politics, one must add a longer history of democratic dissent stretching back six decades.

It is notable that finance minister Lim Guan Eng and defence minister Mat Sabu were political detainees during the Mahathir era.

Having said that, both Mahathir and Ibrahim were stalwarts of the UMNO, the party they conspired to overthrow. Now they have done so, with little outward rancour or sentimentality, will UMNO’s bruised body return to haunt them?

While it is the largest single party in the Federal parliament, Malaysia’s political calculus, its plural society and first-past-the post system demands coalition-building to capture Federal power.

Within these constraints, what will be UMNO’s message and strategy going forward?

A long-time observer of Malaysia politics recently warned that if Mahathir and Pakatan move too forcefully and quickly on institutional reform, there will be a backlash and that UMNO and Islamist PAS will reap benefits from the whirlwind.

Media owned by UMNO say that there is large-scale buyers regret among Malay Muslim voters and attempts to whip-up fear of the Christianisation of Malaysia or attacks on Malay institutions have, for now, been met with tepid support.

No doubt this dynamic could change very quickly and the present government will needless to say be on the watch out for both external and internal threats to its stability.

One truth that most Malaysians have grown accustomed to is that our politics abounds in ironies. And that, perhaps, is not a bad condition to labour under.